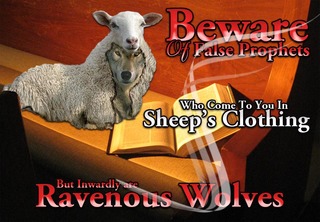 About a month or so after the first false prophet encounter, this girl I know invited me to join her on a prayer line; another big time prophet but I had never heard of him. I was leery but I decided to give it another try. I called into the prayer line, listened to the guy pray and prophesy for and to the people - there seem to have been a lot of people on that prayer line.

As the guy was praying and prophesying to the people, he was giving out his PayPal account information, so they could "sow" a seed to his ministry! Those poor people were more than happy to sow a seed; they felt like they had heard from God - it seemed as if they were more in despair than I was. As he prophesied to them, I could feel the excitement in their voices; it was just sad - they were lambs being slaughtered and did not know it. I finally hung up the phone; I could not take it anymore - I knew they were being conned, since I had been conned some months before. The guy told one lady, she was deep in debt or something but that God wanted her to give him $5000.00, so she could get out of debt! Are you kidding me?? How was she going to give him $5000.00, when she had nothing? But she was so excited and screaming and crying! It is a shame before God, how these false prophet, prey on God's people; they have no conscious or regret! He took their money, in the same breathe he was supposedly, giving them a word from God! Shameful! That guy was not only a false prophet, but a hireling (John 10:12-13)!

About two weeks ago, a guy begin following me on twitter. He sent me a link to his blog site; his daily inspirations. About a week later, he sends me an email, asking if I wanted to sign up for his monthly personal, prophetic emails. He said God told him to send out personal prophecies to people; BUT, there would be a $50.00 charge per month, for the prophecy! Again, REALLY?? I don't know what god he was talking about; it sure was not the True and Living God! God does not condone a false prophet's behavior nor a hireling's behavior. Matthew 10:1 says, Jesus called His disciples together and gave them authority, to cast out evil spirits and heal every kind of disease and illness (NLT). This verse lets us know, that Jesus gives man the authority, to cast out devils and heal sickness and diseases; man cannot do ANYTHING, without the Power of the Holy Spirit.

Jesus wanted the disciples to trust and depend on Him, to give them all they needed. As I said, Jesus did not tell them to charge the people, but He did not object to them receiving hospitality from the people; this is two separate things. Jesus told the disciples in Matthew 10:10, to accept hospitality because those who work, deserves to be fed; hospitality is not the same as charging someone for prayer or prophecy.

When someone prays and prophecy, in the Name of Jesus, they are not to look for a reward; if a person has something to give them, he/she, will give it - they don't have to say, the Lord told them to ask for this amount - they the people, they should sow a seed, to be heal, or for their prophecy to come true - that is baloney!! Again, Matthew 10:8, Jesus clearly told the disciples, give as freely, as they had received.

Salvation is a free gift to us, by the grace of God, through our faith in Jesus (Ephesians 2:8) - BUT salvation cost Jesus His life! God loved us so much, that He gave us His Son Jesus, to die for our sins, sicknesses, diseases, and restore us back to Himself - to give us eternal life (John 3:16).

We have NOTHING! We are who we are because of God's love for us and Jesus' death, burial, and resurrection. How dare someone pimp God's Word for a dollar? These false prophets and hirelings, use God's name for their financial gain. That third false prophet in encountered, as I said, wanted to charge me $50.00 per month, to receive a personal prophecy from God! I know NOT!! I Told him "NO!" I also told him, that is not how God operate - NOT the True and Living God, anyway! I never heard from him again and I deleted his emails and unfollowed him on Twitter.

The last false prophet I would like to tell you all about, sent me an email with the prophecy already in it; at the end of the prophecy, he had a link for an offering - he was asking me for $32.00 for the prophecy he sent me. I have no idea how he got my email; I deleted his email and blocked him.

I am telling you all about my recent encounters with these false prophets, to help you; be careful of these people, supposedly prophesying, "Thus saith the Lord!" Jesus said in Matthew 24:24, "For false messiahs and false prophets will appear and perform great signs and wonders to deceive, if possible, even the elect" (biblegateway.com - NLT).

God bless you and keep you in His prefect peace,