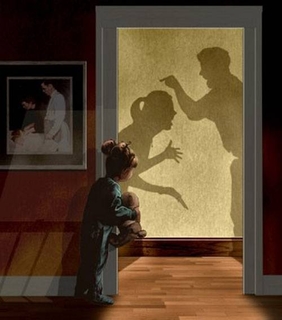 F. What are the feelings of children who are exposed to battering?

Witnessing can mean SEEING actual incidents of physical/and or sexual abuse. It can mean HEARING threats or fighting noises from another room. Children may also OBSERVE the aftermath of physical abuse such as blood, bruises, tears, torn clothing, and broken items. Finally children may be AWARE of the tension in the home such as their mother’s fearfulness when the abuser’s car pulls into the driveway.

Children who are exposed to battering become fearful and anxious. They are always on guard, watching and waiting for the next event to occur. They never know what will trigger the abuse, and therefore, they never feel safe. They are always worried for themselves, their mother, and their siblings. They may feel worthless and powerless.

Children who grow up with abuse are expected to keep the family secret, sometimes not even talking to each other about the abuse. Children from abusive homes can look fine to the outside world, but inside they are in terrible pain. Their families are chaotic and crazy. They may blame themselves for the abuse thinking if they had not done or said a particular thing, the abuse would not have occurred. They may also become angry at their siblings or their mother for triggering the abuse. They may feel rage, embarrassment, and humiliation.

Children of abuse feel isolated and vulnerable. They are starved for attention, affection and approval. Because mom is struggling to survive, she is often not present for her children. Because dad is so consumed with controlling everyone, he also is not present for his children. These children become physically, emotionally and psychologically abandoned.

G. What behaviors do children who witness domestic violence exhibit?

The emotional responses of children who witness domestic violence may include fear, guilt, shame, sleep disturbances, sadness, depression, and anger (at both the abuser for the violence and at the mother for being unable to prevent the violence).

Physical responses may include stomachaches and/or headaches, bedwetting, and loss of ability to concentrate. Some children may also experience physical or sexual abuse or neglect. Others may be injured while trying to intervene on behalf of their mother or a sibling.

The behavioral responses of children who witness domestic violence may include acting out, withdrawal, or anxiousness to please. The children may exhibit signs of anxiety and have a short attention span which may result in poor school performance and attendance. They may experience developmental delays in speech, motor or cognitive skills. They may also use violence to express themselves displaying increased aggression with peers or mother. They can become self-injuring.

H. What are the long-term effects on children who witness domestic violence? – (Part 3A)

Whether or not children are physically abused, they often suffer emotional and psychological trauma from living in homes where their fathers abuse their mothers. Children whose mothers are abused are denied the kind of home life that fosters healthy development. Children who grow up observing their mothers being abused, especially by their fathers, grow up with a role model of intimate relationships in which one person uses intimidation and violence over the other person to get their way. Because children have a natural tendency to identify with strength, they may ally themselves with the abuser and lose respect for their seemingly helpless mother. Abusers typically play into this by putting the mother down in front of her children and telling them that their mother is “crazy” or “stupid” and that they do not have to listen to her. Seeing their mothers treated with enormous disrespect, teaches children that they can disrespect women the way their fathers do.

Most experts believe that children who are raised in abusive homes learn that violence is an effective way to resolve conflicts and problems. They may replicate the violence they witnessed as children in their teen and adult relationships and parenting experiences. Boys who witness their mothers’ abuse are more likely to batter their female partners as adults than boys raised in nonviolent homes. For girls, adolescence may result in the belief that threats and violence are the norm in relationships.

Children from violent homes have higher risks of alcohol/drug abuse, post-traumatic stress disorder, and juvenile delinquency. Witnessing domestic violence is the single best predictor of juvenile delinquency and adult criminality. It is also the number one reason children run away.

The last section posted will be “Domestic Violence Series” – Section XI – Parts 4A & 4B – “Related Articles and Resources for Domestic Violence and Abuse” on Thursday, November 12th. This section has a wealth of information on domestic violence and where you can obtain more information. Contact me if you have any other questions @ dehooks@abusedwoman.org.

Peace be unto you and your family,